Rice Lake had its beginning in 1864, when the Knapp, Stout and company, famed Menomonie logging firm, constructed a storage dam on the site of an earlier Indian village and a wild rice bed, taking the name of the community from that location.

A mill was started at the dam in 1871 by M.W. Heller, who was the first permanent settler to movehis family here.  Heller was also in charge of the first store, hotel, and blacksmith shop, which made the settlement the center for northern operations of Knapp, Stout and Company until the large stands of white pines in the area were exhausted.

Dr. E.T. Whinnery was the city’s first doctor, coming in 1872, and also was the first postmaster when regular mail service coming by stage from Menomonie and Chippewa Falls was established in 1874.

The Chronotype, the first newspaper in Barron County, was begun in Rice Lake September 8, 1874, with C.W. Carpenter as editor. In the same year, the first school opened in a frame building also designed to be the county courthouse, with Miss Monona Cheyney as the teacher.

The original plat of the city was made in 1875 under auspices of the Knapp, Stout firm, including 100 foot wide thoroughfare which is still the heart of the business district.

In 1882 the Chippewa Falls and Northern Railroad built its track through the city. The following year, local capital was obtained to lay trackage for the “Rice Lake, Dallas and Menomonie Railway,” which eventually reached from Ridgeland through Rice Lake to the timber areas northeastward in Sawyer county. It is now a part of the Soo Line System.

A municipal charter for the city of Rice Lake was passed by the State Legislature in 1887, and D.W. Montieth became the first mayor in that year. A volunteer fire department was formed in 1889, and electric lights and water utility were established by the lumbering firms in 1892, being taken over as a municipal utilities soon after 1910. The first radio station in the entire area, WJMC, was established by the McGenty brothers in 1938. 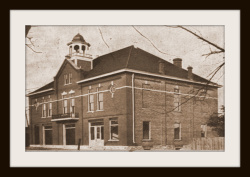 The Barron county Bank, the first in the county, was opened in Rice Lake in 1882, and the Bank of Rice Lake, now US Bank, was established in 1888. Gustafson’s Ice Cream Company dates from 1904.

The city has maintained a four year high school since 1882, and established the Rice Lake Vocational School in 1940, an institution now expanded to more than 500 students, and now named the Wisconsin Indianhead Technical College. The Barron County Normal School opened in the city in 1907, and was succeeded in 1966 by the Barron County Branch Campus of Stout State University, which in 1972, become the University of Wisconsin Center-Barron county, with an enrollment of over 50 students as a two year Junior College. 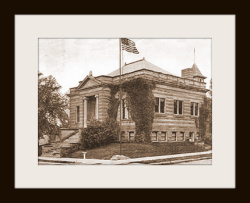 The city library, first opened in 1897, occupied the Carnegie financed structure from 1905 until 1976, when it relocated to its present location on North Main Street.

Rice Lake is located in Barron County in northwestern Wisconsin, serving a primary retail trade area of approximately a 50 mile radius as the largest community between Eau Claire, 60 miles south, and Superior, 100 miles to the north. It is just 100 miles northeast of Minneapolis and st. Paul. The area is famous for fishing, hunting, and sports as well as being a popular summer resort area. with several recreational real estate developments underway in the area.

Dr. Kent Syverson will be giving a presentation at UWEC-BC this Friday night about living off the grid in the Alaskan wilderness and more. ... See MoreSee Less